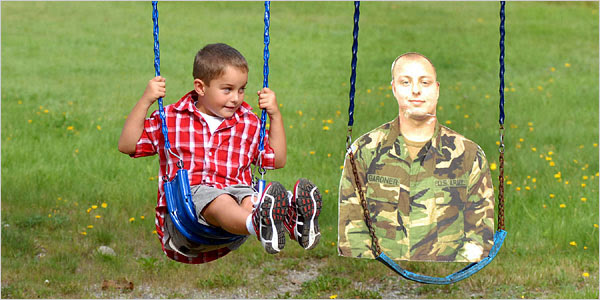 Admittedly he can't talk to you or tousle your hair or kiss you goodnight or take a job to support you, but in a lot of ways he's preferable to the real thing: for example, he doesn't wake up screaming in the middle of the night, and he won't file expensive disability claims like more than one-quarter of the live veterans returning from Iraq and Afghanistan. Meet your Flat Daddy, courtesy of Zemblan patriot K.Z.:

It is one of the hardest things about being a military family. How to cope when a husband and father, or wife and mother, is posted abroad, especially to combat zones such as Iraq or Afghanistan.

Now the United States army has come up with a bizarre solution: Flat Daddy and Flat Mommy.

Many military units can provide families with a life-size cardboard cutout of their overseas warrior. The family can then take that figure to parties, put it in the passenger seat of their car, take it to bed or do whatever it is that families want to with a replica of their loved one . . . .

In Maine alone, the state's National Guard has given out more than 200 Flat Soldiers since January. The scheme began in North Dakota when one army wife, Cindy Sorenson, made up a life-size photograph of her former husband for their daughter, after he was sent to Iraq . . . .

From there the idea took off and has been adopted by units across America. They can be found going on dates with their wives in Alaska and having dinner with their families in Colorado.

Say, if we really wanted to win a few hearts and minds, maybe we should print up 655,000 Flat Iraqis.