Old joke: conservatives believe that government is incapable of accomplishing anything good, and from the moment they assume power set about trying to prove it. Right-wingers, disgusted by government waste-and-fraud, seek reflexively to replace it with corporate waste-and-fraud -- at a substantial markup. Sure, the taxpayer gets a little less bang for his buck, but the look of porcine glee in the eyes of the campaign contributors is unquestionably worth it.

This fetishization of the "free" market has now spread to the Department of Defense and beyond, to America's armed forces in Iraq, where the gradual supplanting of U.S. citizen-soldiers by "private contractors" (or, to call them by their traditional name, mercenaries) is perhaps already leading to an ominous sea change in the philosophy that animates our military-industrial complex. Hendrik Herzberg will elucidate below, but first, a little background information that may be new to you, from an excellent piece by Jeremy Scahill of the Indypendent:

Precise data on the extent of U.S. spending on mercenary services is nearly impossible to obtain — by both journalists and elected officials—but some in Congress estimate that up to 40 cents of every tax dollar spent on the war goes to corporate war contractors. At present, the United States spends about $2 billion a week on its Iraq operations.

While much has been made of the Bush administration’s “failure” to build international consensus for the invasion of Iraq, perhaps that was never the intention. When U.S. tanks rolled into Iraq in March 2003, they brought with them the largest army of “private contractors” ever deployed in a war. The White House substituted international diplomacy with lucrative war contracts and a coalition of willing nations who provided token forces with a coalition of billing corporations that supplied the brigades of contractors.

During the 1991 Gulf War, the ratio of troops to private contractors was about 60 to 1. Today, it is the contractors who outnumber U.S. forces in Iraq. As of July 2007, there were more than 630 war contracting companies working in Iraq for the United States. Composed of some 180,000 individual personnel drawn from more than 100 countries, the army of contractors surpasses the official U.S. military presence of 160,000 troops . . . .

In a revealing admission, Gen. David Petraeus, who is overseeing Bush’s troop “surge,” said earlier this year that he has, at times, been guarded in Iraq by “contract security.” At least three U.S. commanding generals, not including Petraeus, are currently being guarded in Iraq by hired guns. “To have half of your army be contractors, I don’t know that there’s a precedent for that,” says Rep. Dennis Kucinich (D-Ohio), a member of the House Oversight and Government Reform Committee, which has been investigating war contractors.

Privatized forces are also politically expedient for many governments. Their casualties go uncounted, their actions largely unmonitored and their crimes unpunished. Indeed, four years into the occupation, there is no effective system of oversight or accountability governing contractors and their operations, nor is there any effective law — military or civilian being applied to their activities. They have not been subjected to military courts martial (despite a recent congressional attempt to place them under the Uniform Code of Military Justice), nor have they been prosecuted in U.S. civilian courts. And no matter what their acts in Iraq, they cannot be prosecuted in Iraqi courts because in 2004 the U.S. occupying authority granted them complete immunity . . . .

In many ways, it is the same corporate model of relying on cheap labor in destitute nations to staff their uber-profitable operations. The giant multinationals also argue they are helping the economy by hiring locals, even if it’s at starvation wages.

“Donald Rumsfeld’s masterstroke, and his most enduring legacy, was to bring the corporate branding revolution of the 1990s into the heart of the most powerful military in the world,” says Naomi Klein, whose upcoming book, The Shock Doctrine: The Rise of Disaster Capitalism, explores these themes.

“We have now seen the emergence of the hollow army. Much as with so-called hollow corporations like Nike, billions are spent on military technology and design in rich countries while the manual labor and sweat work of invasion and occupation is increasingly outsourced to contractors who compete with each other to fill the work order for the lowest price. Just as this model breeds rampant abuse in the manufacturing sector — with the big-name brands always able to plead ignorance about the actions of their suppliers—so it does in the military, though with stakes that are immeasurably higher.”

While Iraq currently dominates the headlines, private war and intelligence companies are expanding their already sizable footprint. The U.S. government in particular is now in the midst of the most radical privatization agenda in its history. According to a recent report in Vanity Fair, the government pays contractors as much as the combined taxes paid by everyone in the United States with incomes under $100,000, meaning “more than 90 percent of all taxpayers might as well remit everything they owe directly to [contractors] rather than to the [government].” 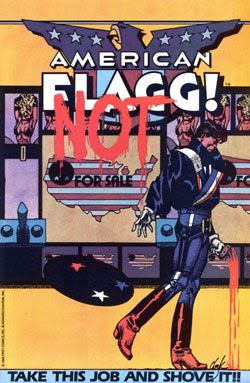 Hendrik Hertzberg attended Yearly Kos and described, in his New Yorker blog, a panel discussion in which former national-security aide Lorelei Kelly made a point that was new to him. After describing the privatization of military functions as a "direct attack on [the] ethic" of public service to one's country -- ask not, etc., etc. -- she added that:

The military-industrial complex produced by the Cold War (which still consumes untold billions even though the weapons systems it builds are perfectly useless for the national-security threats the country now faces) was and is able to prosper in the absence of actual fighting. The purpose of piling up all those missiles targeted on the Soviet Union, after all, was to avoid using them. But the kind of privatization represented by the gun-toting Iraq war contractors has created what she called “a live war military-industrial complex” -- that is, an industry that depends for its profits, even its existence, on hot wars, wars that kill people. “Free-market conservatives have given us this,” she said.

Quite a legacy. In happier times, at the height of the Cold War, say, the mere prospect of death and destruction was enough to make the American people open their pocketbooks and feed the insatiable leeches who live off the largesse of the Pentagon. Now, in order to keep the profiteers fat and happy, we have to get out there on the ground and spill some real red blood.

CONFESSIONAL SIDEBAR: At the risk of sounding old and fartish, we must admit that it was profoundly disorienting to type the phrase "In happier times, at the height of the Cold War, say" -- and worse yet, to mean it.

CONFESSIONAL SIDEBAR II: Nor did "in his New Yorker blog" spring naturally from the imperial fingertips.